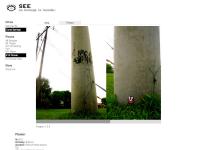 DESCRIPTION:
See Project's creation was to pay the public expression of respect to Invader, a Parisian Street artist. In an act to bring the game of space invaders to life and 'invade' the entire world with his work, Invader pastes up characters from and inspired by the Space Invaders game, made up of small coloured square tiles that form a mosaic [Wikipedia]...In the same spirit, See is a project who utilizes the use of small low-res graphics of classic video games not to provoke, but rather, to map a city with regards to significance, memory, spacial relevances.
More Screenshots: